Canker Sore Vs Cold Sore: Many of us tend to use the terms “cold sores” and “canker sores” interchangeably. After all, they’re both pesky, painful mouth sores, right?

Turns out, there are more differences than similarities between the two. Here’s how to tell if you have a canker sore versus a cold sore–and what to do about them.

What is a canker sore?

Canker sores, also called aphthous ulcers, show up as open sores on the inside of your mouth, usually on the inner parts of your cheeks or lips or on your tongue, says Paras Bharatkumar Patel, DDS, assistant professor of oral and maxillofacial pathology at Texas A&M College of Dentistry in Dallas. “You wouldn’t find them on the gingival [gum] tissue or the hard palate,” he says, although they can appear at the very base of your gums.

Canker sores start as a small bump inside the mouth then burst a day or two later, leaving a whitish or yellowish area with a red border. They often, but not always, appear in clusters and can be anywhere from ⅛ of an inch to 1¼ inches in diameter. Unlike cold sores, they aren’t contagious.

No one knows exactly what causes or triggers canker sores. It could be a virus; allergy to food or medicine; stress; smoking; a nutritional deficiency like low vitamin B12, folic acid, or iron; hormones (which may account for why twice as many women as men get canker sores); and spicy or acidic foods, like tomatoes and citrus fruit. Canker sores also tend to run in families and are more common in people who have dry mouths (which can be due to some medications). 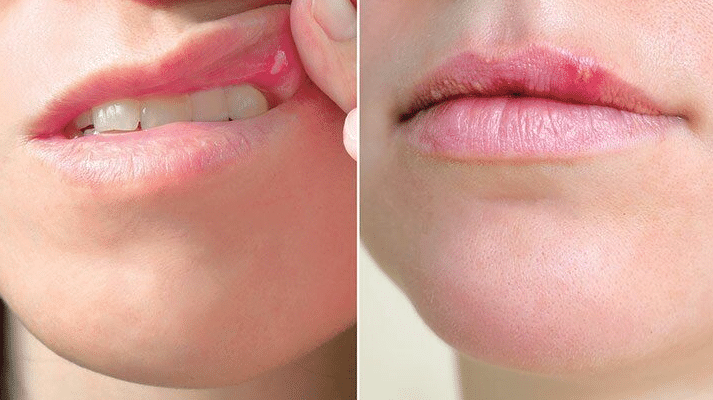 Canker sores may also be due to a physical injury. “At times, I see them show up a few days after some traumatic event: contact sports, a frayed brush, a sharp potato chip, or even poorly fitting oral devices,” says Tyrone Rodriguez, DDS, a spokesperson for the American Dental Association.

Many canker sores remain a mystery. “Not all cases have a single known cause, as there are [many] possibilities that may not all be able to be explored,” says Patel.

In most cases, you can let canker sores run their course. Most go away within a couple of weeks. For pain, which usually only lasts three or four days, you can try acetaminophen (Tylenol) or use an anesthetic oral gel-like benzocaine. Stay away from nonsteroidal anti-inflammatory drugs (NSAIDs) like ibuprofen, since they may cause canker sores in some people.

Some at-home remedies work as well, like gargling with a solution of salt and baking soda in water. Avoid toothpaste and mouthwash with an ingredient called sodium lauryl sulfate, which may contribute to canker sores.

Also, see a doctor or dentist if your canker sores are making it hard to eat or drink or if they last longer than two weeks.

What is a cold sore?

Unlike canker sores, cold sores appear outside your mouth, often on the corner of your lip. Also called fever blisters, they are in fact little blisters that tend to break quickly, leak fluid, then eventually scab over. You might feel a little tingling in a day or two before a cold sore appears.

There’s no mystery about what causes cold sores: It’s the herpes simplex virus 1 or HSV-1. This isn’t the same as the virus that causes genital herpes (HSV-2), but they’re similar in that once you have the virus, it never goes away. Herpes viruses are extremely contagious and very common.

After the initial infection, HSV-1 travels up the nerve, staying out of sight until something triggers it. Then, it migrates back down the nerve to the mouth. “Once it establishes itself, any time there’s trauma or any sort of transient lapse in immunity, the virus is going to manifest itself,” says Patel.

Stress is a big trigger, along with sun exposure, fatigue, your period, and other infections (like a cold). If you know your triggers, you may be able to prevent an attack (for example, by reducing stress or putting zinc on your lips before going outside).

Most cold sores go away in their own time, usually seven to 10 days after they appear. The pain often reaches a peak in the first 24 hours.

In these cases, there is a greater risk of the virus affecting the brain or spinal cord, and, says Patel, “you’re going to have to treat them a little more aggressively.” That could mean taking an oral antiviral, like acyclovir, on a long-term basis, he says.

Cold sores also spread like wildfire, so it’s important to take steps to prevent them. “You’ve got to be careful not to share straws, lip balm, or lipstick, or drink from the same glass,” warns Rodriguez.

If you happen to touch a cold sore, wash your hands right after, and make sure you don’t touch any other part of your body, especially the eyes because you can transmit HSV-1 to yourself. “Just ignoring cold sores isn’t necessarily the best way to take care of them, as they can spread to other body parts,” Rodriguez says. Don’t scratch or pick at the blisters, either.

One of the main differences between cold sores and canker sores is location. Canker sores usually appear inside your mouth, while cold sores appear on the outside.

Cold sores are also extremely contagious, while canker sores are not at all.

While canker sores tend to last a little longer, both types of sores are harmless unless you have an underlying immune-system problem.

Is A Canker Sore A Sign Of An Std?

Canker Sores Are Not an STD

Canker sores are ulcers that occur in the soft tissues inside your mouth. They are associated with various nutritional and immune deficiencies. Unlike cold sores, canker sores are not STDs.

Can Cold Sores Cause Canker Sores?

Are Cold Sores and Canker Sores the Same Thing? No. Unlike canker sores, cold sores are caused by a virus and are extremely contagious.

What Causes Canker Sores In Mouth?

Some possible causes of canker sores include the following: Injury to the mouth may cause simple canker sores. The injury could be from vigorous tooth brushing, dental work, braces or dentures, or a sports accident. Acidic foods, including citrus fruits, may trigger a canker sore or make it worse.

Can You Get Cold Sore On Your Tongue?

Oral herpes is an infection caused by the herpes simplex virus. The virus causes painful sores on your lips, gums, tongue, the roof of your mouth, and inside your cheeks. Because the virus is highly contagious, most people have been infected by at least 1 herpes subtype before adulthood.